Twenty nine riders braved freezing wind and the threat of rain on Saturday morning for the final race of the Warragul Cycling Club’s spring handicap series.

It would always be a tough day for the limit riders. First off with 12 minutes on scratch was Ray York, Colin Manintveld, Michelle Scurr and Andrew Jackson. Michelle struggled early thanks to starting the race with a spongy front tyre.  A pit stop after lap 1 fixed that and she finished the race. Ray, Colin and Andrew were the last group caught by the eventual winners. 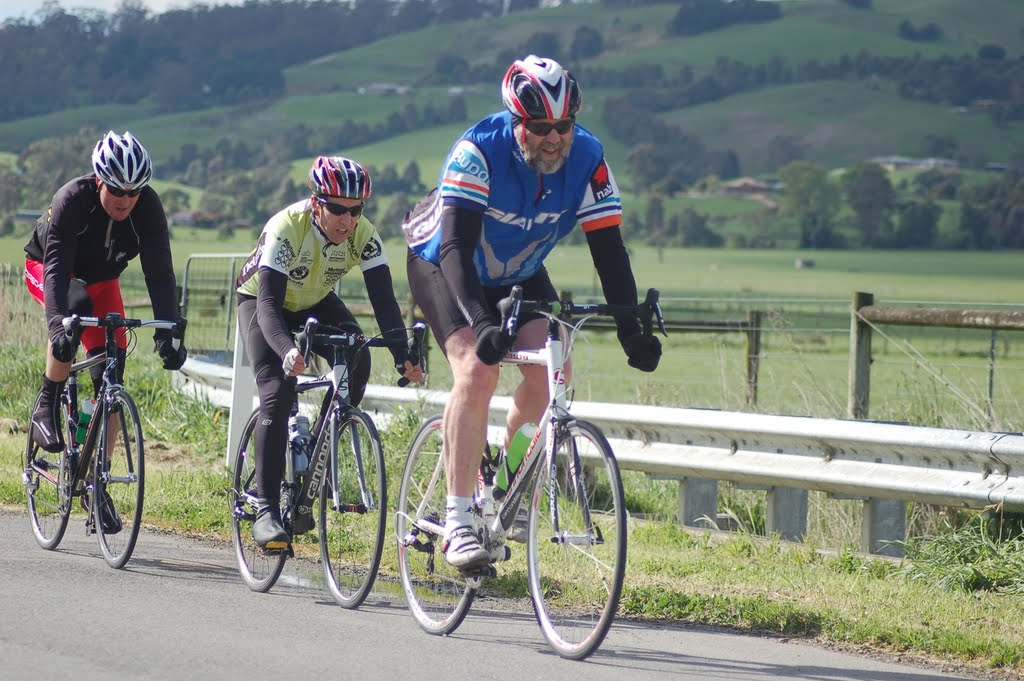 With 10 minutes on scratch Peter Sorenson, Graeme Patrick, Andrew Gordon, Zvonko Maric and Shane Pettingill struggled to stay together from the start. Graeme was first to lose contact with the bunch. 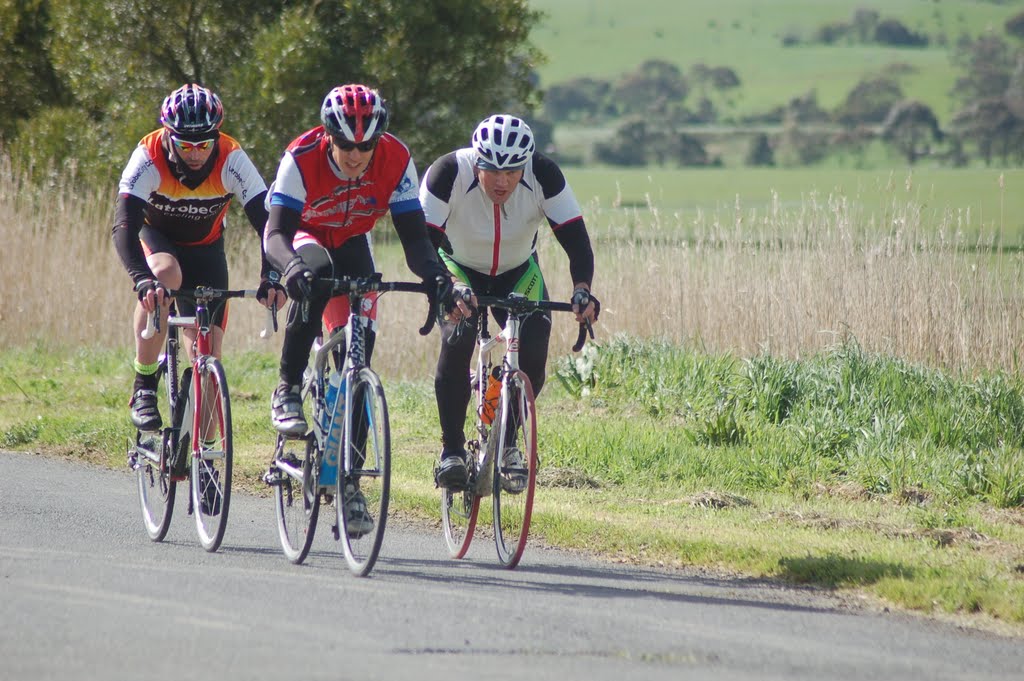 Justin Prestidge and Col Brown were the smallest group of the day. 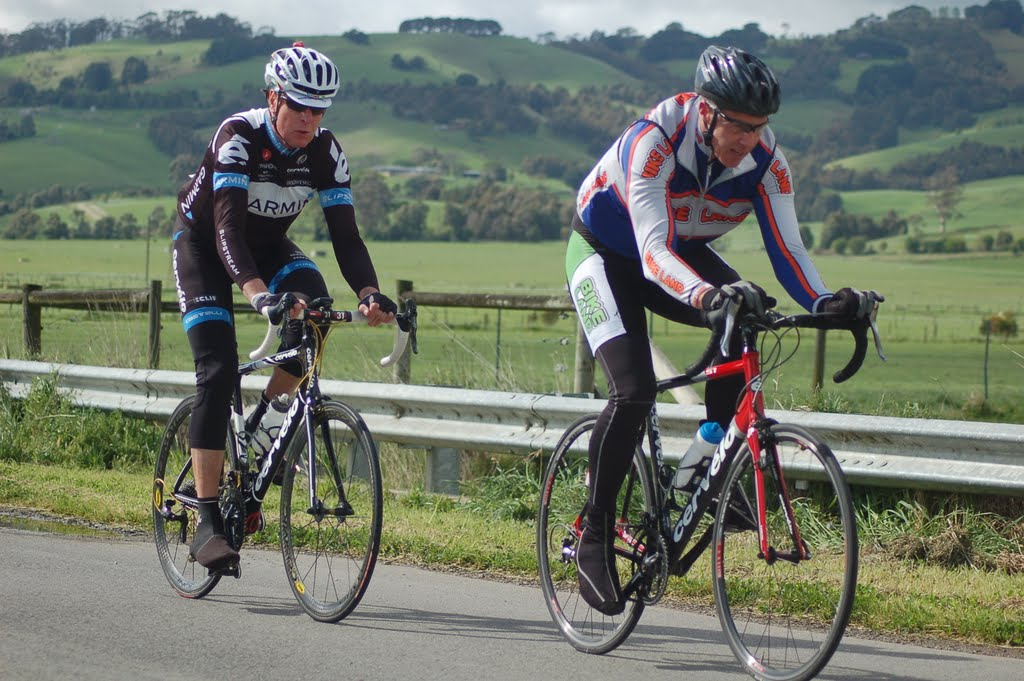 They made a wise decision to not waste too much energy battling the strong head wind on Parker’s Rd and waited for the 5 minute bunch of Jason Dastey, George Tambassis, Stuart Battley and Ewen Williams. Williams and Battley were determined to stay away from the chasers and were stronger than the rest of the group.

The 3 minute bunch looked the likely winners before the race. They had numbers on their side which would be crucial in the windy conditions. Scott Keeble, Rob Monk, Geoff Thomson, Jayden Manintveld, Jayman Prestidge, Pete Whelan, Dave Salton and Jimmy Lalor teamed well early. 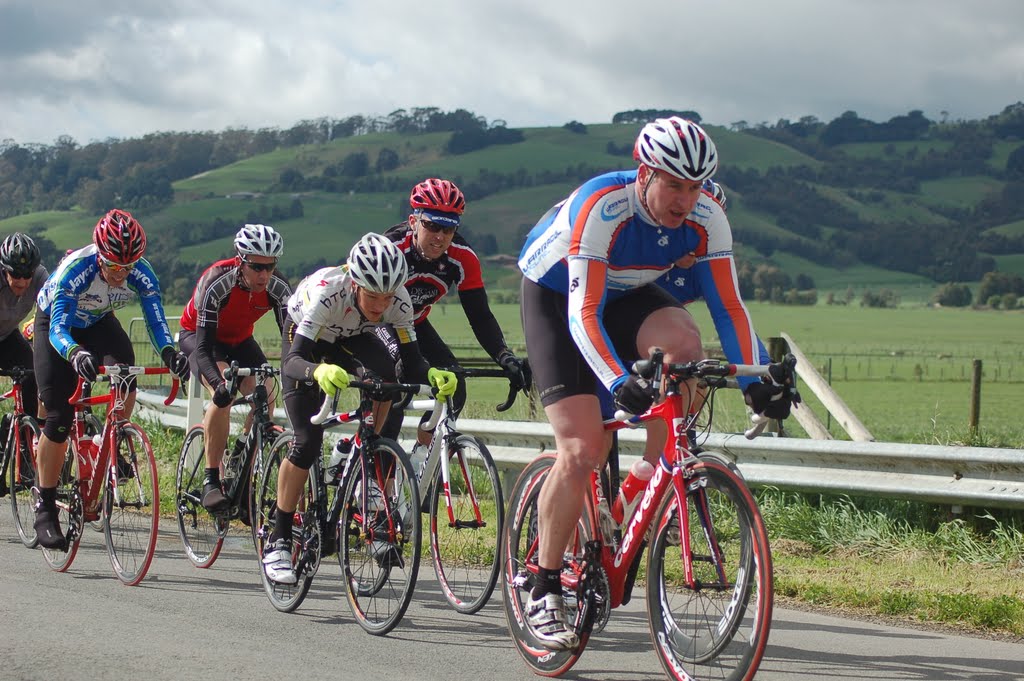 After a lap and a half it was clear they would catch the bunches in front. Lalor was an early casualty of the relentless pacemaking mainly carried out by Keeble, Manintveld and Salton.

The chopping block group, with 1.5 minutes on scratch was made up of Pete Finlayson, Graeme Parker and Jack Walk. 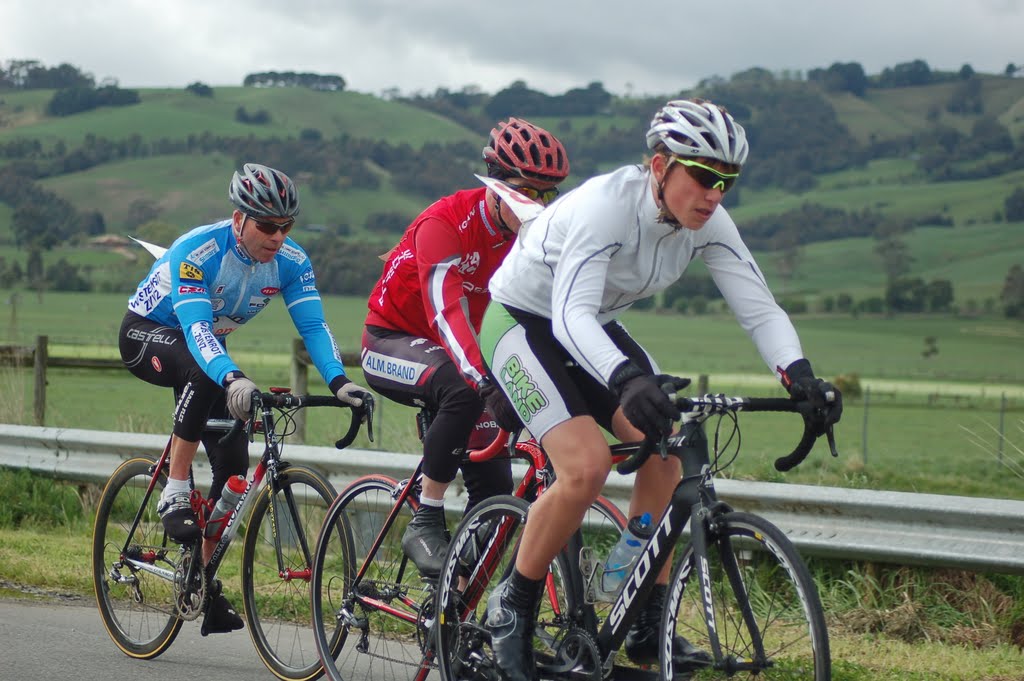 The scratch trio of Cy  Monk, Justin Gravett and Jarryd Jones caught them on lap one. They would chase the 3 minute bunch all race but in the end finish less than a minute behind. 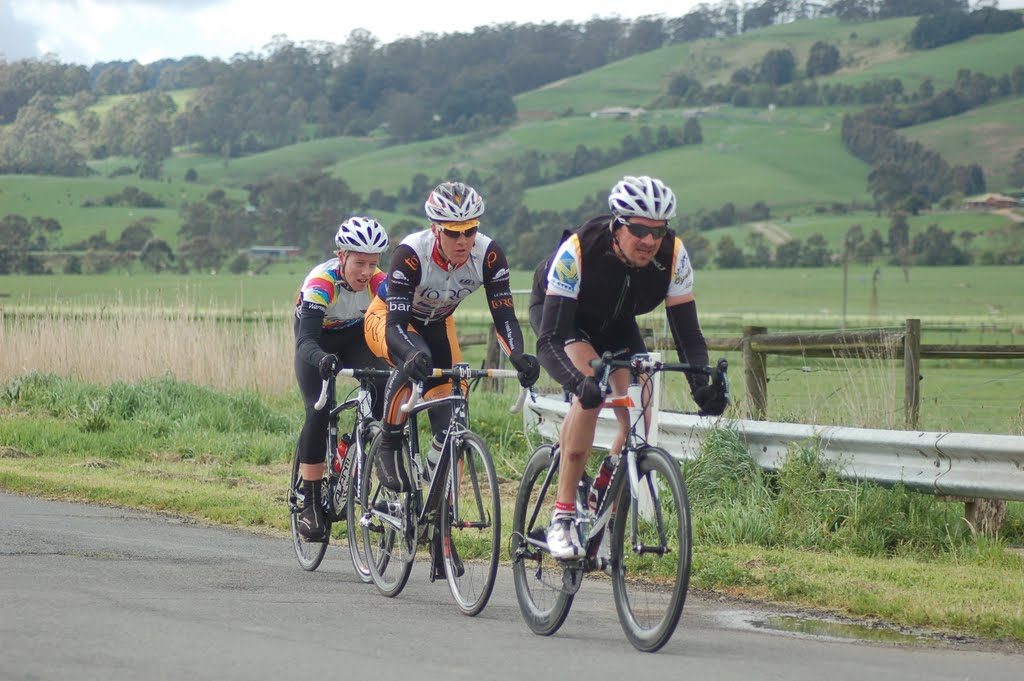 The 3 minute group picked up all those in front by lap 3. A group of nearly twenty riders was together as the bell sounded to indicate one lap to go. Keeble, Manintveld and Thomson put it in the gutter on the way up to the top turn.  The gradual climb, strong crosswind and increase in tempo saw the lead group cut to 10 riders by the corner. Manintveld, Keeble, Williams and Salton kept the pressure on form most of the final lap to ensure the groups behind would not catch.

It was clear by this stage that the group would not be caught so some riders began to conserve energy for the final sprint.

Rounding the final bend a bunch sprint looked likely. The run to the line was sedate with no-one wanting to lead out the sprint in the strong crosswind. With 300m to go Rob Monk took a fly around the field and in the process was momentarily forced across the centre line. Race director Yeatman was quick to note the infraction.

Monk sprinted for home with only Dave Salton a chance to catch him. Salton went for an inside line but Monk managed to close that option near the line forcing Dave into the gravel. Rob was first over the finish line but was subsequently DQ’d. This meant Salton was awarded the win. Scott Keeble finished powerfully to take a well earned second place from Geoff Thomson and George Tambasis.

Thommo and Tambasis were effectively fighting out the series but by finishing within one place of Thommo, George did enough to take the series prize. Then followed Pete Whelan, Jayden Mantiveld, Jason Dastey, Ewan Williams and Col Brown. Cy Monk took out fastest time about a minute later.

Next Saturday there is a team’s race at Darnum on Saturday and the Morwell to Glenmaggie Handicap on Sunday.
Podium

The music is the webmaster’s own creation circa 1995 (so turn the volume down!).