How B grade unfolded (told from webmaster’s perspective).

The race began fast and got faster when we took out first left. I was the only rider on the correct side of the road for much of the trip along  Boolara Churchill Road and Hazelwood Estate Road. This left me exposed in the wind so I spent much of the race tail ending (good that I could keep up basically riding on my own, bad I was wasting energy and had no trouble keeping up when in the bunch when they were on the correct side of the road). No energy for the KOM’s or sprints.

On lap two along Callan Barker took off after the sprint and was caught by the turn into Boolara Road.  Pre-race the plan was to go with him.  Along Hazelwood Estate Road there were lots of shenanigans with riders launching attacks only to ram their brakes on shortly thereafter.  Dangerous.

I got dropped on final hill though I clawed my way back by the second corner after the KOM point – according to my computer I also hit my top speed at this point.

A group of 3 (including the overall winner, Jim Timmer-Arends) took off about halfway along Hazelwood Estate Road and no one seriously chased.  I took off with 800m to go but died with about 200m to go (I was not expecting to stay away, but you never know).

At the end of the race I was in 6th place.  Heading into the tour the plan was to finish top five. CURSES!

Leongatha seemed to have a plan to send riders up the road, one at a time. I made sure our newbies got some experience at chasing them back. Jason Dastey and Jaymon Prestige did a great job as the domestiques chasing back the breaks.

We let Neil White from Leongatha who was well down on the GC, take the first KOM points and Jarryd beat Shannon over the top to get the three points for second. This mean Jarryd and Simon were equal leaders of the tour with Shannon one point behind them.

I was leading the sprint comp and if I could win the first sprint and Shannon get nothing I would have an unbeatable lead. When the next Leongatha rider went up the road I planned to jump across to him and hope we could stay away till the sprint which was about 10km away. Kevin Feely from Leongatha had come second in the time trial the day before so when he rode off the front I let him get 100 meters then jumped across as fast as I could.

I was pretty pleased when I looked behind and no-one was chasing. I expected Shannon to be closing the gap but it was all Warragul Orange, White and Blue on the front and they were doing nothing.

Kevin and I rode to the sprint swapping turns. As I started to sprint I heard his front tyre blow. He managed to roll over the line to get second but I had lost my breakaway partner.

I was tempted to sit up and wait for the bunch but I could not see them behind so I figured I may be able to stay away till the next KOM. Given I skipped the time trial yesterday it was time to do mine today.

I made it to the KOM on my own and collected 5 more points. When I looked back two Leongatha guys were on their way up the hill. I recognised one as Jake Laine the guy who won yesterdays time trial by a minute and the other guy was super strong too. The cycling gods were smiling on me today. These two were ideal breakaway companions. I rolled down the hill and waited for them to catch. We made a pact to work together until we were caught.

I won the final sprint which meant I’d collected 15 points on the road and was now the race leader. We continue in team time trial mode up the KOM for the final time. The bunch were closing on us now and our lead was probably 300 meters going over the top of the climb. We continued to work hard into the strong head wind and gradually the gap opened again. In the sprint for the stage I took the win and the final 10 points.

Some days everything just goes right for you. 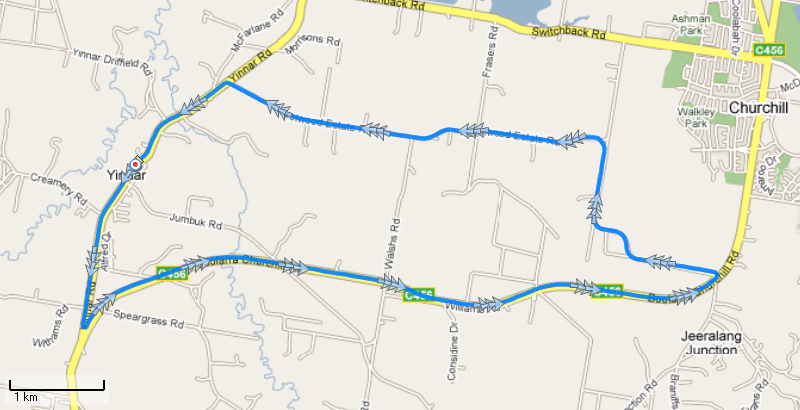