Champions win championships. When the big races come around the best riders find their mojo and rise to the occasion. That is exactly what Shane Stiles did on Saturday in the Warragul Cycling Club Criterium Championship. Stiles started the year in awesome form but had a quiet February. He was back in top form on Saturday beating a mojoless Kane Walker in a sprint finish.

The club championship is a mass start event meaning anyone can win, even C and D graders could have a day out and challenge the A graders. Twenty riders started and B grader James Lalor was not going to be intimidated by the A grade elite. He attacked from the gun causing some of the C grade riders to lose contact before the end of lap one.

By lap 3 some semblance of order returned and A grade strongman Matt Malacarn pushed the pace out front. He dangled off the front of the chasing peloton and when he was joined by time trial specialist Daryl Anderson a promising break was up the road.

Shane Stiles punctured at this point giving the breakaway some chance of success. The race was delicately poised.

Kane Walker and Paul Yeatman did the majority of pace making at the front of the chasing peloton making sure the gap didn’t open too far.

By the time Stiles got a new wheel and rejoined Anderson was back in the bunch and Malacarn was under control only 20 meters off the front.

After two fairly sedate laps the big boys decided the race needed to broken up. Shane Stiles flew up the King Street hill and Callan Barker was the only rider to go with him. By the back straight they had a sizeable lead. The Peloton waited for the inevitable Kane Walker counter attack. When it came only Tristan Maruat could go with him. Jayman Prestige provided a moving road block on the front of the chase group as he let the bunch split letting wheels go up the road everywhere. Malacarn, sensing this was the crucial break, tried to chase over the gap but only made it half way across before blowing up.

Walker, Stiles, Barker and Marat were away. Yeatman tried to bridge, but was in no man’s land for a short stint, and slacked the pace after entering Burke St. The chasing bunch gave up the race quickly there after.

Stiles and Walker drove hard for a couple of laps opening up an unbeatable lead. Barker and Marat were in the red zone and as sometimes happens in this situation Tristan clipped a wheel and came down. He had a lap out then rejoined the race. Barker was dropped but still managed to hold on for forth spot. Tristan could not hold the leaders either so it was down to two, Walker and Stiles.

Walker managed to put Stiles in the lead in the final straight but Stiles played the young fellow like a fish on a line. He jumped for home opening a gap that Walker had to work across. As soon as Kane was nearly back in contact Stiles accelerated again. Kane was never quite in on the wheel or on top of his gear. When the final run to the line began Kane could not bridge the gap. Stiles won by half a wheel from a frustrated Kane. Tristan took third.

The B grade Club Criterium Champion would be determined by the highest unplaced B grade finisher in the race. In the chasing group Rob Monk, Ross Henry, James Lalor, Charlie Davine and Scott Keeble were competing for this prize. Rob pushed the pace up the King St Hill with two laps to go. He was joined over the top by Davine and Lalor but the trio could not maintain their advantage for long.

In the final lap Keeble led the field for home. He set a solid tempo with riders jockeying for position on his wheel. Rob Monk locked onto Keeble rounding the final bend and Rob opened up the sprint 350 meters from home. Davine and Lalor tried to go with him but Rob finished strongly taking the B grade championship. Charlie Davine took second from James Lalor in third.

In the Junior Club Championship (J15 and below) Jayden Manintveld and Cy Monk staged an epic battle.

There was nothing between the boys all race and in the final sprint Cy looked to have the race sewn up with 100 meters to go. He had got the jump on Jayden in the sprint but Jayden timed his run perfectly to take the Championship by a wheel. Jayden first, Cy second with Nic Anderson in third.

Next week’s race is the Gippsland Criterium Championship in Maffra. Can Walker get the mojo back or will Stiles teach the young fellow another lesson in how to perform at your best in the big races? 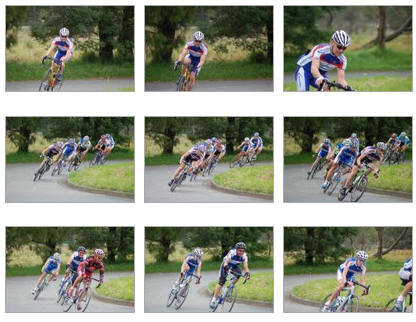