Warragul Cycling Club members gathered to contest the annual Club Championship Road race on Saturday. The format is a little different to normal races. A mass start is used, which means that everyone starts together and anyone can win the club championship.

The junior riders, 15 and under, and the women’s race would be 3 laps or 51 km. The senior riders raced over 4 laps which equates to 68 km.

Lap one was ridden at warmup pace for most. Junior riders Cy Monk and Jayden Manintveld hung onto the big boys easily. The ladies found the pace of the climb a little too great and settled down to contest their own race.

Trudi Gallagher, Tammy Patrick and Karen Munro were evenly matched but on the final time up the hill Trudi broke away and sustained her advantage to the finish. Tammy was second with Karen in third and Renee Patrick in forth.

The junior race was hotly contested as the young fellows hung onto the wheels of the senior riders for as long as they could. On the climb on lap three Cy Monk just lost contact with the main bunch going over the top which allowed Joe Patrick and Jayden Manintveld to get away with the rest of the group. Joe put in a strong attack at the end of Stur’s Rd and Jayden was unable to chase him down. Joe took out a tough win and is the Junior Club Champion. Jayden was second with Cy taking third.

The result of the open race was effectively decided at the beginning of lap 2. Brenton Jones and Shane Stiles put the pressure on in the second half of the Shady Creek climb and no-one else could go with them. They worked together on the decent and even though the chase group had 15 riders no-one seemed too keen to chase the two elite men down. Stiles and Jones worked together for the remaining two laps. Brenton was too quick in the sprint finish and took out his first Warragul Cycling Club open Championship. Shane finished second in the race but took out the Masters 123 Championship. 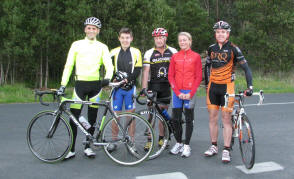 Kane Walker was MIA as he was competing in the Teschner Crit Carnival held in St. Kilda.  He took out 3rd place in A grade.  Brenton Jones followed up his win on Saturday by taking out 1st place in the Tiples Male Bendigo 6hr event today. He said afterwards that he was very happy to take the win and SMOKE the fastest lap time of the day.