In what was a huge weekend for Warragul cyclists not even the freezing horizontal rain could dampen the spirits or discourage riders who turned out the club championships on Saturday then the Victorian Country Road Championships on Sunday.

There were 5 separate races on Saturday to determine club champions in the different divisions. Thirty five riders turned out in what could only be described as miserable conditions.

First away was the open field. The race would be dominated by the Jones boys, Jarryd and Brenton. They managed to shake Charlie Davine and went on to cross the line locked together. Brenton finished just in front of Jarryd to take out his third consecutive open club Championship. Jarryd was second with Charlie third.

The largest field of the day was in the Masters 123 race. Paul Yeatman rode off the front at the start and was caught along Sthurs Road where Shane Stiles and Scott Keeble rode off the front.  They sat up going over the hills and the bunch reformed, but not for long.  A Stiles led attack heading into the second lap took Keeble and Yeatman with him. This trio powered away.  As the chase group initially worked together, with four laps to go, it was looking like a catch would be made.  An increase in speed along the main straight buckled the chasers and they splintered. The leaders continued their consistent track turns and only slowed with a lap to go.

At the finish Stiles rode away and eased down on the line nearly allowing a fast finishing Yeatman to grab the win, whose lunge saw him miss out by a tyre. Nearly is not enough though. Stiles first, Yeatman second and Keeble finished third. Glen Marriot smashed the strong but not fast Leigh Hauxwell in the sprint for fouth.

Masters 4+ was a tactical battle. As usual Thomas Sandner was allowed to roll off the front and timetrial for much of the race off the front. For the first 2 laps he had Graeme Parker for company. Parko grew tired on lap 3 and rolled back to the bunch. Thomas powered on alone. Pete Finlayson put in some surges but only managed to dislodge Frank Benstead, Graham Patrick and John Davine from the chase pack. There were some stunned looks on lap 6 when Geoff Thomson rode up the road on his own. Thommo has not attempted a solo break since 1978 so the rest of the field could not work out what was happening. He was eventually reeled in at the bell and a sprint was looking inevitable. Ross Henry gently rolled off the front with 3km to go to the finish. Everyone looked at each other. “You chase him”, “No you chase him” was all that could be heard. In the end no-one chased hard enough or early enough and Ross rode away to victory. In cycling, fortune favours the brave. Great win Ross. Pete Finlayson was second with Thommo third.

The women’s race was a tightly contested affair. The field was together for the first 3 laps until Adele Whelan lost contact. Kate Prestige did everything she could to shake the rapidly improving Rachel Dawson. Rachel was struggling on the hills but was able to power back to Kate on the flats. Kate led out the sprint but Rachel was just too strong in the sprint taking out her first club championship. Kate was second with Adele in third.

The Juniors battled it out over 6 laps. Jayden Manintveld decided an attack on lap 1 was a good way to win the race. Joe Patrick, Cy Monk and James Blyth were happy to let him dangle while they worked turns to keep him in sight. By lap 5 he’d been caught and passed by Cy and Joe who went on to contest the finish. Cy tried to shake Joe on the hills in the final lap and managed to gap him but not drop him. Joe was still on his wheel rounding the final turn. Cy put the brakes on, made Joe lead out the sprint and went past him nearing the line to take the win. Joe was second with Jayden in third.

Mitch Jones was the J13 champion.

Eight Warragul Riders made their way to Harcourt on Sunday for the Victorian Country Road Championships.  Due to road works, the larger lap was modified to an out and back loop.  This made the racing a little less hilly.  The weather was chilly, but sunny –  a perfect day after Saturday’s horror.

Mitch Jones made it two from two for the weekend taking a gold medal in the J13 race.

Brenton Jones finished a very close second in the main event of the day, the Victorian Open Country Road Championship.

In the Masters 3 race Paul Yeatman finished 4th in a tight bunch finish.

Rob Monk won a bronze medal in the Masters 4 race. 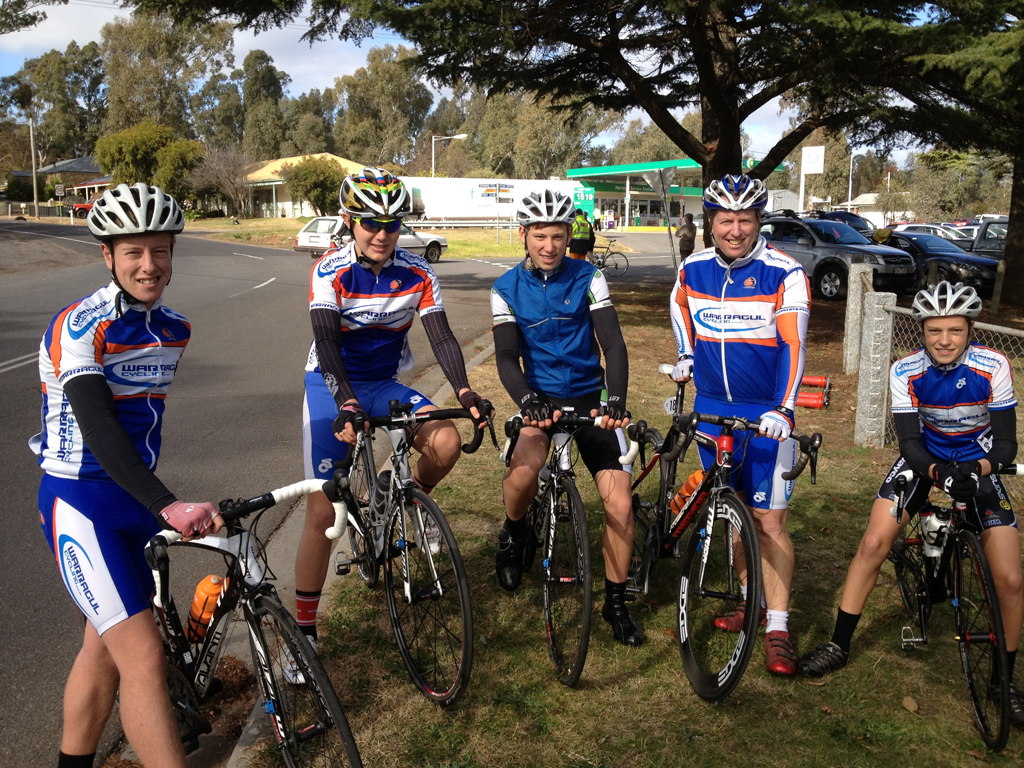