Riders were treated to a new 19km Latrobe City Cycling Club course this weekend, looping from Westbury out along Old Sale Road, a harder than it looks climb up O’Briens Road before turning into Embletons Road where some S bends made for some fun cornering.  Following that, a little climb up Heartridge Rd was a good place for an attack before some rolling hills and then the final flattish 7km run to the line.

The race began at a mild pace and then sped up a little on the rise along O’briens Road before turning into Embletons Road.  Here some attacks shed Darren Spiteri and Tex Walker.

After this, the pace seemed to be fairly sedate until the last 10kms where riders were eager for the sprint.

In the end,  Jason Strickland (Latrobe)  got up by 2 seconds for a maiden win over Ollie McLean (Leongatha).  Daniel Furmston (Latrobe) was next, 42 seconds down and closely followed by Will Lumby (Leongatha).  Conor Bagot, the best placed Warragul rider was next another 4 seconds back.  The winning time was 01:33:14 for 60kms..

Less than two minutes after the start, Paul Yeatman (Warragul) took off and rode off into the distance thinking he might try to bridge to A grade before slacking off.  His lack of climbing legs saw him caught by the “top” of the hill along O’Briens Road by the chase lead by Jim Timmer-Arends (Latrobe).  After the catch, pretty much everyone spent some time on the front.

Soon after Spiteri and Walker were collected and sat on the back of B for the remainder of the race.

Things were settled until lap two where Jim Timmer Arends attacked up the climb after the turn into Heartridge Road.  He took Peter Macdonald (Warragul) and Leight Stott (Leongatha) with him.  Yeatman and Mark Mason (Warragul) chased back on with Allen Timmer-Arends (Latrobe) enjoying the tow.

Things heated up in lap three.  Stott picked up the pace towards the turn into Embletons  Road. He was closely followed by Yeatman who after one too many pace changes by Stott, decided that was it for him and he was dropped.  Mason and Allen also found the pace too much at this point.  This allowed Stott, Jim and Macdonald to get a decent gap.  A lack of cohesion (or perhaps some easy riding) could not withstand a TT effort by Yeatman who was back on the bunch for the turn into Heartridge Road. With two riders in the remaining four man bunch being Warragul, they should be able to work over the other two for the win.  Stott would have none of that.  He launched a series of attacks (about 6 of them) in the final 12 minutes of the race kilometres before Jim (who never countered the moves) launched what looked to be the winning move with 2kms to go.  He rode off and got a 200m gap on the field.  Stott launched a bridging attack and caught Jim who then veered off the road and did a good job to stay upright.

Yeatman and Macdonald slowly bridged the gap to Stott with Warragul taking the win by a length or two by the line.  Stott was second and Macdonald third.

After two laps, Peter McLean (Leongatha) came across the line first from Mike Renehan (Wellington) and John Taylor (Warragul).  Michelle Scurr (Brunswick) and Rod Cheyne (Leongatha) finished with the same time as Taylor who was two seconds behind McLean and Renehan.  The winning time was 01:11:41 for 40kms. 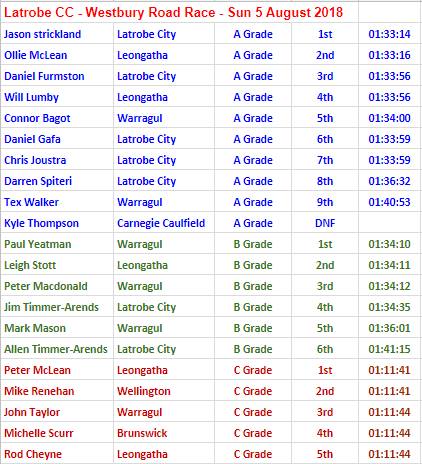 Next week  (August 11), racing is at Cloverlea (starting at Darnum at 2pm).  It is a teams race finishing at the Cloverlea Fire Station.