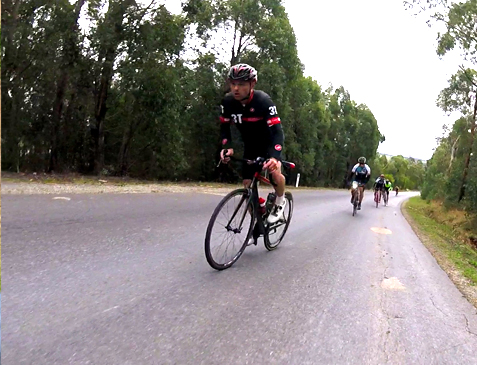 Warragul Cycling Club ventured out to a new Racing Circuit this week, and we might of found a GEM in Jindivick West!

Rain clouds stayed away, and allowed for 26 racers to hit the new circuit.

Start point was Jindivick township, to ensure everyone was set for the day, and then a neutral roll along Jacksons Track, until the racers passed the Jindivick West Rd intersection, and then racing was on.
A 16km triangular loop down Jacksons Track, left into Old Telegraph road, and then left onto West Jindivick road, formed the perfect loop of flats, rollers, hill climbing and an uphill sprint finish!!

C and D Grade headed off first, with 2 laps of the triangular circuit ahead of them.
Donna Innes-Wardell already had D grade sewn up, but started off strong with C graders Edward and Graeme.

A Grade was next to roll out of Jindivick, and they had to complete 3 laps of the new Jindivick triangular circuit.
A strong 11 man field, with some of WCC’s finest, several of Leongatha top talent, a couple of Non-Gippslander’s, and a lone ranger representing LaTrobe.

B Grade rolled out last, with a very strong 12 racers field, and they also had to complete 3 laps of the circuit. This field was made up of many of WCC’s solid B grade bunch, plus Martin Bando who ventured down from Caulfield, and Leongatha’s Peter McLean made to move up to B grade. Also WCC’s shining star Ash Diston also moved up to B grade, and showed us all she’s a future talent in WCC.

By the end of the first lap the B grade bunch were pretty much still together, even with the highly fancied Matt Parkinson, Tommy Reid and Tex Walker still rolling around with the rest of the B graders.

In A grade, by the end of the first lap, Baw Baw Cycles frontman Sequoia was looking comfortable in the Jindivick hills out front, along with WCC’s Jason Laird, who was still looking strong after competing in the Baw Baw Classic recently.
These 2 stayed out front and continued to look good. After the 2nd lap they were still well ahead, but Leongatha’s Alex Dunbar has broken away from the bunch, and was sitting 3rd with 1 lap to go, and chasing down Sequoia and Laird.

Meanwhile in B grade, the bunch was still together by the end of lap 2, however club stalwart Ross Henry, had grabbed an extra 50 meters out the front of the bunch as they crossed the line with 1 lap to go.

Back to C and D grade, and Edward is developing nicely! He is in good form and rolled through the first lap out front, and then continued to win C grade with a solid solo effort. Greame Patrick pushed through well to finish second in C grade, whilst Donna stuck it out strong, to finish the 2nd lap, and take out D grade.

Final stages of A grade, still had Sequoia and Laird out front, sprinting for the uphill finish line. Sequoia still had enough in the tank to take the sprint, and be first across the line in A grade. Jason Laird 2nd, and Alex Dunbar managed a strong final lap, and rolled home on his own to finish 3rd ahead of the bunch.
Remaining placings were Ollie McLean, Stott, Rollinson, Kennedy, Bagot Jr, Brett, Styles, Patrick.

B grade finished on a different note, with the highly fancied Tom Reid saying goodbye to B grade racing, and easily finishing solo well ahead of the B grade bunch. Tommy put the hammer down on the final lap, and coasted home for the win. 2nd place was taken out by a strong finish from Caufield’s Martin Bando, with the smooth sailing George Tambassis taking out 3rd.
Remaining placings Tex Waker, Yeatman, Henry, Neil Walker, Bagot Snr, Parkinson, Monk, McLean, Diston.

Well done to all those involved, and it was a top day for WWC and an awesome debut for the West Jindivick Circuit.