Warragul Cycling Club members raced for the annual Tim McArdle Handicap on Saturday. A good field of 26 riders contested the event. The race was the final of the 6 race BikeLand Handicap Series. Riders would race over five laps – a total distance of 40km.

Over the last couple of races the limit bunches have had the advantage but the complexion of this race would be different. When scratch markers  Kane Walker, the Victorian Country Road Champion fresh from the tour of Tasmania, and Brenton Jones, who this year represented Australia in mountain biking in Europe, turn up to race and they join Victorian Masters Road Champion Shane Stiles on scratch,  the bunches they are chasing will find it tough to stay away.

Stiles, Walker and Jones set a blazing pace from lap one. They caught second scratch quartet of Paul Yeatman, Callan Barker, Geoff Thomson and Jayman Prestidge after two laps. Thomson and Barker managed to hold onto the train but Prestidge and Yeatman were dropped.

Meanwhile ahead the B+ group comprising Brett Rollinson, Rob Monk and Pete Finlayson had caught B grade riders Jason Dastey, Jarred Jones, Matt Kennelly and Darren Williams. This group came together after two laps and had shared the workload into the head crosswind along the Darnum Shady Creek Road on lap three. When the charging A graders caught them at the beginning of lap 4 a scratch victory was looking likely.

Stiles ensured the pace was even enough for the combined group of 12 riders to stay together. Only Darren Williams and Jarred Jones dropped off.

At the bell the scratch men had C+ and D grade in their sights. They roared past Joe Patrick, Dave Bailey and Matt Williamson. Next to be caught were Graeme Patrick, Zvonko Maric, John Davine, Colin Manintveld and Cy Monk. Such was the speed of the passing group that none the riders being caught could hold onto their wheels.

Matt Kennelly and Rob Monk were struggling at the back of the A grade train and Matt dropped off passing the Darnum footy group on the final lap. At this stage, all limit riders with one exception had been caught. Jayden Manintveld had ridden on his own from the start and he was still the leader of the race.

Stiles let the leaders know they still had one to catch and encouraged everyone to roll through.

The crucial move of the race was made a kilometre from the turn into Sthurs Road. Thommo had just rolled off the front of the bunch when Kane Walker attacked. Only Stiles and Jones could go with him.

Barker, Thomson, Rob Monk and Pete Finlayson kept working but the leaders were gone by the turn into Sthurs Rd.

They powered down the steady decent of Sthurs road at over 50km/h and flew past Jayden within a kilometre of the finish.

Stiles led out the sprint setting up a match race between the young guns Kane Walker and Brenton Jones. The uphill finish proved to Brenton’s liking and he took out a strong win. For the second year in a row Kane was second in the Tim McArdle and Stiles finished third. Twenty seconds later in a hotly contested sprint for fourth, Geoff Thomson was too strong for Pete Finlayson and Rob Monk. Then followed Callan Barker and Brett Rollinson. Jayden Manintveld finished next.

The overall series winner was rookie rider Matt Williamson. He finished just in front of Cy Monk with Pete Finlayson in third spot. Thank you to BikeLand for their generous sponsorship of the races.

Well done to all forty eight riders who contested the series. We take a break from racing next week and begin a Criterium Series around the Bourke Street circuit in two weeks time.

A three minute head start on scratch over the five laps saw the second scratch bunch of Jayman Prestidge, Thommo, Callan Barker and Paul Yeatman caught before Sthurs Road on lap 2!  This was despite doing fairly consistent turns.  Paul got dropped pretty much right away and having left his race legs at home, pulled out after a dismal third lap at 25kph.  Jayman followed on the next lap.  Thommo and Callan managed to stay with the scratchies and reel in everyone else.

Entries across the grades were very even this week with all bunches containing 3 or 4 riders. Conditions were tough with a head cross wind across the back half of the circuit, conditions that would favour the stronger and the more experienced riders.
Handicap times from the previous week were used, however an extra lap was added to the race, this would enable bunches to come together that bit closer than the previous week’s margin.
Junior riders were kept at the shorter 4 lap distance and had times adjusted accordingly.  This is a difficult handicap to calculate but was right on the day with both riders being caught in the closing stages of the race.
Early lap times had the bunches catching each other on target for a spectacular finish, A+ was an exception to this, they were eating up massive time gaps.  This was the first and only handicap race with several scratch riders on the start line, so the handicapper had a more difficult task setting this handicap bunch than the others.
On the day the scratchies proved to be much faster than anticipated and swept past the entire field and took the top three places at the finish; regardless a suitable finish to the series with well shared spoils! 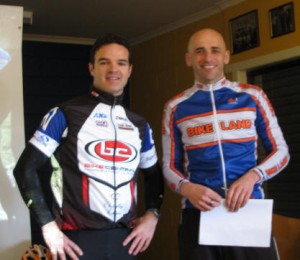